SAFE-HEET is a thin flexible pad that is bonded to the engine oil sump.  The kit is complete with materials and step-by-step instructions.  A log book entry is all that is required for permanent installation; No S.T.C. or 337 form required.  There are no airframe modifications required.  SAFE-HEET can be used with a timer or the 707 temperature controller, and uses standard 110 A.C. voltage.  We recommend using the SAFE-HEET 707 Temperature Controller to cure the adhesive for faster installation.

By adding the OPTIONAL 709 Ground Fault Circuit Interrupter and surge protector you can make your engine pre-heater even safer.  With ground fault and surge protection the chance of dangerous and undetected lightning and mechanical damage that could cause lethal electrical shocks or engine damage is eliminated.  SAFE-HEET uses U.L. recognized components and a 100% thermo-fused element.  The element itself shuts down the flow of electricity if any point on the element overheats.  SAFE-HEET is thermostat controlled to maintain oil sump temperature less than 160 deg F.  There is no flame or hot air to burn paint or plastic parts.  The risk of fire associated with cold starts is reduced. The 709 Ground Fault Circuit Interupter and surge protector Provides compliance withMcFarlane Service Bulletin SB-3

ECONOMICAL AND EFFICIENT
SAFE-HEET puts the heat where it is needed with very little loss to the surrounding atmosphere.  The air inside the engine is heated by the warm oil sump.  The warm air goes up and the cold air goes down, your engine is heated from the inside out.  It uses about 300 Watts which costs about 3 cents per hour to operate.  Less than 1 hour will generally warm the engine oil from subzero to safe easy starting temperature.  The entire engine will be warm in 2 to 3 hours.  The adhesive is thermo-conductive, and the metal foil heatsink is vulcanized to the pad for even heat transfer.  SAFE-HEET reduces costly starter and engine abuse during cold weather starts.

The Variable Temperature Controller can also be used for extended periods by setting the indicator in the blue or red range.  These lower temperature settings help prevent the internal engine corrosion normally associated with leaving heaters on at full power.  The Variable Temperature Controller allows the user to determine what setting best fits each unique situation.  For example, if subzero weather is forecasted and a flight is anticipated in the next couple of days or a week the controller can be set at about 50-75% brightness of the indicator light.  The reduced setting will maintain the engine temperatures just above freezing.  This engine temperature will not promote internal engine corrosion but will allow quick pre-heat when the aircraft is needed.  For completion of the pre-heat, the controller can be turned to full power for a short time just before starting the engine.

The Variable Temperature Controller cord is 25 ft long.  Temperature range at the top of the blue arc is 125-150 degrees Fahrenheit. 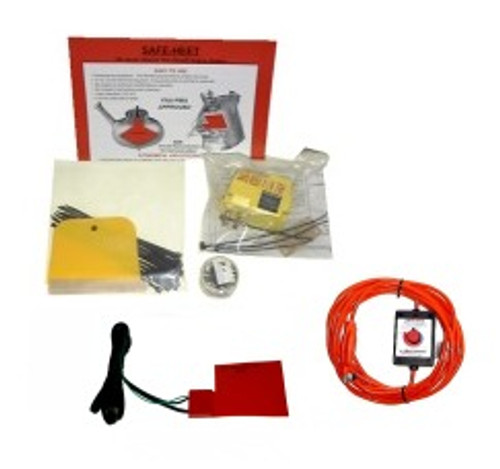