Join Barry Schiff on an amazing journey across time and space as he flies and brings home reports on some of aviation’s most rare and popular aircraft. Dream Aircraft documents his lifelong voyage flying aircraft that pilots and aviation enthusiasts dream of flying. Some of these aircraft are so rare that most pilots have never even seen one, let alone had a chance to fly them. Each chapter is dedicated to a different aircraft as the author describes the unique aspects and performance characteristics: exactly how it feels to be behind the control wheel (or stick, as it may be). The book is dripping with detail and gorgeous images that will immerse the reader in an experience like no other. From the nostalgia of the Spirit of St. Louis, to the popular WWII fighter P-51 Mustang, to the exciting Lockheed U-2, this book is the who’s who and how-to on some of the most remarkable aircraft ever developed. Partial list of featured aircraft: Culver Cadet Fairchild 22 Lockheed U-2 Ryan NYP The Spirit of St. Louis Goodyear Blimp McCulloch J-2 Gyrocopter NASA’s Space Shuttle Orbiter SIAI Marchetti SF.260C P-51D Mustang Transavia PL-12U Airtruk Antonov AN-2 Beech T-34 Mentor Douglas DC-3 Beriev 103 Grumman G-44 Widgeon Curtiss Wright Junior Ryan PT-22 Recruit Lockheed 12A Electra Junior Barry Schiff’s expertise in and passion for aircraft have made him one of the most sought-after aviation journalists in the world. He has amassed more than 26,000 hours in over 300 types of aircraft and received worldwide recognition for his wide-ranging accomplishments. During his 34-year career with Trans World Airlines (TWA) he flew everything from the Lockheed Constellation to the Boeing 747. He remains active in the aviation community as a vigorous advocate for general aviation and one of the most respected authorities on pilot proficiency, human factors education, and aviation safety. Barry’s profound gift for storytelling and universal appeal are apparent more than ever in this beautifully woven tale of discovery. Dream Aircraft is an extraordinary work that aviation enthusiasts will treasure for years to come. Soft cover, 7-1/4" x 9", 328 pages. (Click "Detail" above to see the full table of contents.) 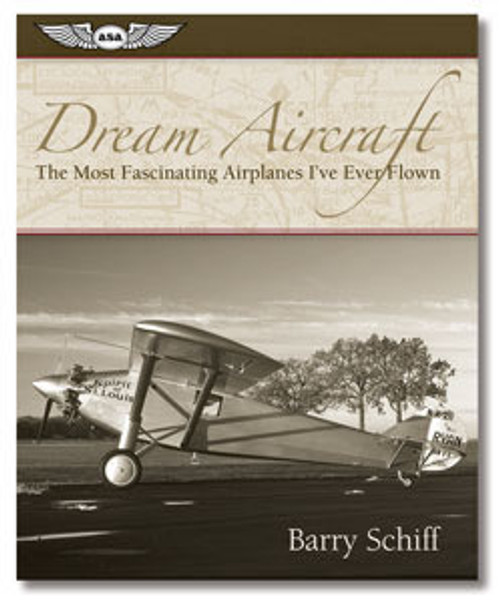